I am usually not one to just "go ahead" and start out on something without a plan – I like to flesh out things in my mind and thus, I had carved out the direction of my entry before I started building, story-wise. The mission's objective required the Rebel Alliance to investigate in a murder attempt on Luke Skywalker. Obviously, after how I introduced my protagonist – arrested by the Alliance – I could not let Cody Startale go free to investigate on his own. Luckily, I had Alia in place to take over that role and circumstances simply force her to drag Cody around.
The idea to have them run into a bounty hunter came early to me. It seemed a natural consequence and obscure enough to fit into the story – I couldn't reveal the culprit behind the attempt on Luke's life because I didn't know him myself, and hiring a bounty hunter to do some henchman work certainly seemed like a plausible thing to do for whomever was behind this incident. This also gave me a great opportunity to introduce a new character into the story, this time an antagonist, to oppose the good guys. 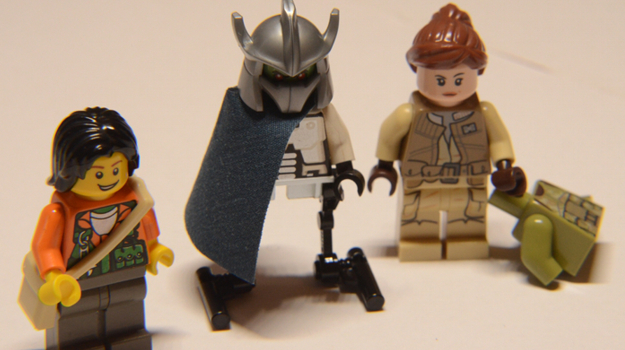 Surprisingly, it took me a few days to come up with Ruw Zabro's name. I wanted something that sounded Star Wars-y enough for my personal liking and also something that fits his race. Even though he is part-android and heavily disfigured, Ruw Zabro is originally a Shistavanen, the wolf-like race first introduced in A New Hope. The Shistavanen from this movie is called Lak Sivrak and served as my basic template for the name's "rhythm", in a sense. A short and snappy first name and longer surname. I stuck to that formula when I came up with my variant. But I wanted something "sharper", more dangerous-sounding like a predator – so I made the name an anagram for my favorite videogame werwolf, Killer Instinct's Sabrewulf ("sabre wulf" < > "Ruw Zabro").
Once I had the name, his personality formed naturally in my thoughts and soon I had a very concrete idea of direction for this character, his meeting with the protagonists and the overall plot of the episode. So I started bringing my ideas into physical form. 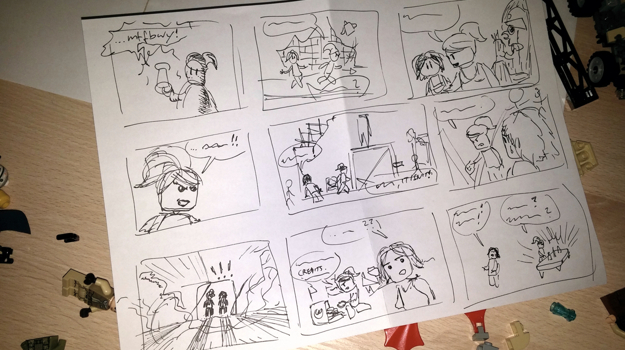 I am a movie enthusiast and hobby filmmaker. When I think of a story, I usually think of a movie! It helps me picturing how a scene plays out, how characters talk, act and move and how things are being portrayed; and Star Wars is a movie franchise, after all. So, I started with a classic film storyboard! I didn't continue after this first page, but when I drew it, it really helped me bring all my vague ideas into concrete visual form. As you can see, I already thought of camera angles and stuff like that and the beginning of the story is pretty much an exact execution of all these ideas. 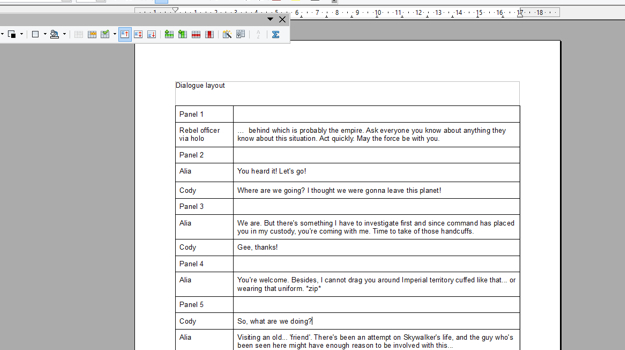 The next step was the dialogue. I am also a passionate enough writer and even though my English is not comparable to my native German, I like to think that I still am talented enough to come up with some compelling lines of dialogue.
Writing down the dialogue helped me organizing how much text and information would be in a panel and gave me an overall idea of how many panels I would need to tell everything that I wanted. When I had developed my plot, planned the overall execution and finished my build, it was time to take the pictures.

Continue with Part 2 to learn more about the photography!